Isfahan is an open-air museum, one of the best examples of Persian and Islamic architecture. Capital of the Persian Empire between 1592 and 1722, it is known as “Nesf-e Jahan” (half of the world), an allusion to its beauty, as many consider that half of all the beauties in the world are located there. The city is full of gardens, squares, mosques, bazaars, among other buildings to be visited.Isfahan is the third most populated city in Iran after Tehran and Mashhad. Isfahan has a moderate climate with regular seasons. The daytime temperature during the summer is around 35 °C, but due to the cold wind and low humidity, the climate remains pleasant.

What to do in Isfahan:

Literally “map of the world”,  listed as a UNESCO World Heritage Site in 1979. Imam Square (Meidan Emam) is surrounded by the beautiful bazaar that served as a commercial center in the Middle Ages, when the city was a major stop along the Silk Road . Next to the bazaar, many buildings are reflected in the large swimming pool in the middle of the square. One of the most beautiful squares in the world is about 512 meters long and 160 meters wide, with rooms on two floors of one size and form. There are four unique monuments around the square. Ali Qapu’s magnificent mansion, the mosque of Sheikh Lotfollah’s mosque and the head of the Qaiserieh market gate, was in the middle of the main square, the floor and two polygon gates. 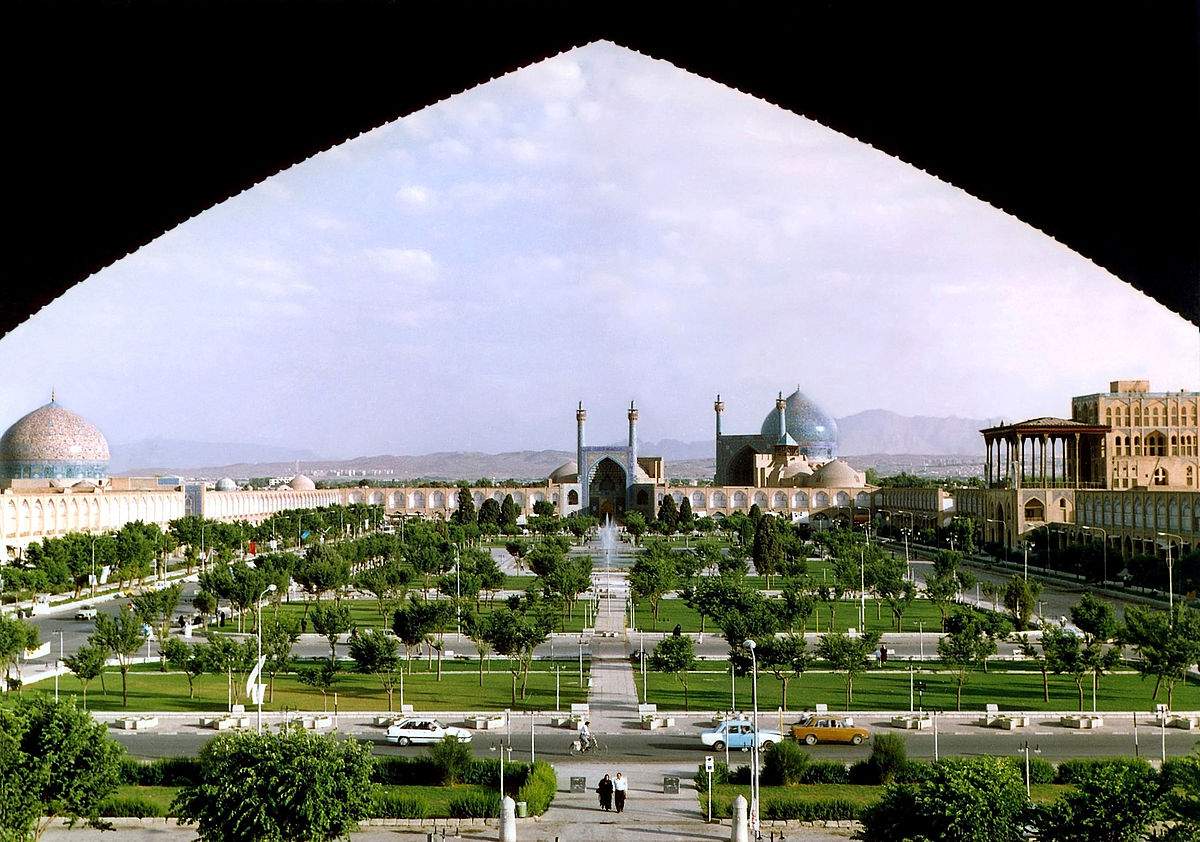 The only mosque without minarets, the Sheikh Lotfollah Mosque was actually a private place of worship that housed an Islamic school. The interior decorations never fail to warm its visitors, this is one of the most photographed attractions in Isfahan. On its ceiling, you can see the tail of a peacock shaped by the light piercing through the dome, crumbling to reproduce a forbidden animal figure as a decoration. The royal palace overlooking Imam’s Square and facing the Sheikh Lotfollah Mosque, Kakh-e Ali Qapu was built in the 16th century as the residence of Shah Abbas. This building with a height of almost 38 meters is popular for the tallest monument of the 16th century. The monument built on 4 floors, but later during the reign of Shah Abbas II, two floors more with a music hall at the top was built to expand the palace. Two sets of stairs connect the floors to the top. They are so narrow that only one person can climb the stairs. It is one of the historic markets with a series of small domes atop the arched passageways of the bazaar. It is a link between Naqsh-e-Jahan Square and the Jame Mosque. It was built in the time of Shah Abbas I, in the early 1600s. This bazaar has a dozen entrances. Qeysarieh is the main entrance at the northern end of Naqsh-e Jahan Square, decorated with beautiful tiles depicting the battle of Shah Abbas with the Uzbeks. The oldest parts of the Bazaar date back to a thousand years. Isfahan market is one of the biggest markets in Iran, which has different parts and sells items all over the world. For example, crafts, gold and silver, rugs, shoes.

Chehel Sotoun Palace. “Forty pillars” in Persian, located behind Naqsh-e Jahan. Here Shah Abbas II had his parties and received foreign dignitaries and ambassadors. The name Chehel Sotoun is inspired by the reflected image of the 20 wooden pillars of the palace’s entrance pavilion in the water of a swimming pool in front of the palace. The palace has many paintings on pottery, the roof of the palace is made of a kind of plantain wood with an amazing decoration. 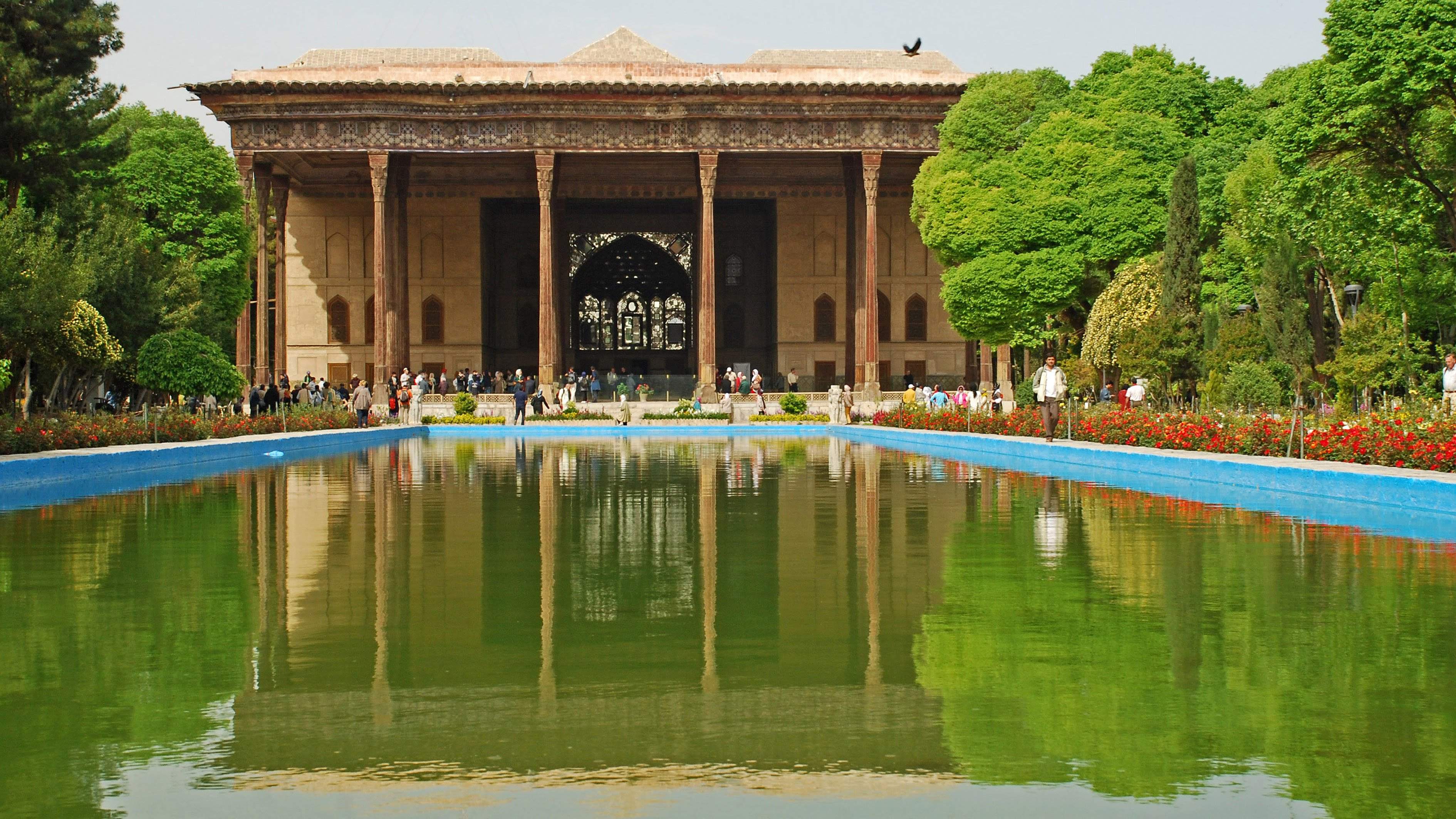 Started around the year 1650 by the command of Shah Abbas II. The monument is built in stone and brick on two floors. The bridge is 110 meters long and 20 meters wide. According to historical records, the primary purpose of building this bridge has been to make a connection between some districts of the road from Isfahan and Shiraz. The upper floor was used for the passage of horsemen and the lower floor as a pedestrian area. 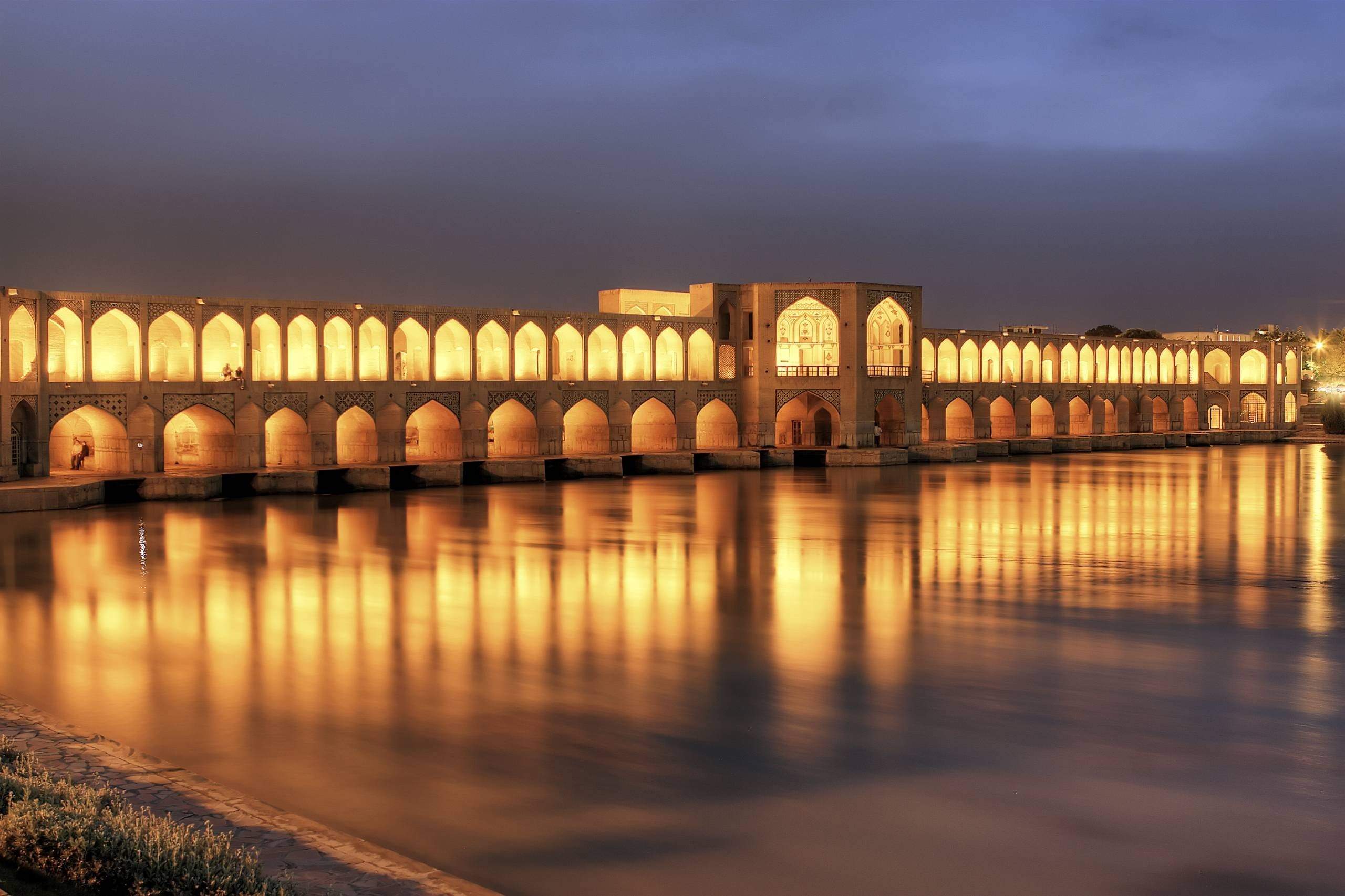 It is the most luxuriously decorated palace in Isfahan, built in the Safavid era. The special connection between indoor and outdoor spaces is very interesting and unique. Most travelers at the time confirmed that the building was one of the largest and most magnificent and beautiful buildings in the world compared to European palaces. Hasht Behesht is built on two floors, two meters above ground level. It has huge wooden pillars. The building is octagonal, and has 4 facets, all similar and at the same time each has its own specifications. You cannot recognize which is the main front of the building.

a 33-arch bridge, Si-o-se-pol or AllahVerdi Khan bridge, was built at Zayandeh Rud during 1599-1602. This bridge is the longest bridge built on Zayandeh Rud and is still standing after 400 years. This 298 m long bridge is made of stones and bricks, and functions as a dam as well. Within the Jolfa district, it is the main place of Christian worship in Isfahan and also the main landmark in the Armenian quarter. Started in 1606 and completed in 1665, the church has an austere exterior that becomes a feast of paintings and decorations once inside.